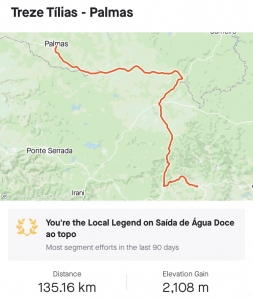 How hard can it be to start cycling again after three weeks of “real” vacation in Brazil? Well… hard! We had such a great time in Treze Tílias, the town in Brazil where Franklin was born. Luxury to spend three weeks with family and friends, drinking Caipirinhas and eating way too much food.

Good that we agreed with Lucas and Heino that we would leave to Foz on the 11th, otherwise we would have never left.

So this morning the alarm went way to early, after a night of sleep that was way too short. But… excited – because back on the bike. finally!

We met with Heino at 06:10 to start our 138km trip to Palmas. The first part of the road is quite hilly, some steeper short climbs and one 20km climb which is a bit more relaxed. Not too many trucks, no crazy dogs and cloudy. Perfect start of the day! Not so perfect is our shape. We gained some weight, did not cycle much because we were sick for a week and needed some time to recover. And then starting again with all the bags was just heavy.

Before we took a left turn to direction Palmas. The hard shoulder of the road disappeared, but the truck drivers really were considerate and friendly. Only one of them pushed Heino off the road. 65km, some more hills and some bad tarmac later, we arrived in Palmas.

A man stopped and mentioned that he is a cyclist as well. Three other guys on bikes passed by and we (well not me, because my Portuguese is still far from fluent) talked about our trip and plans for the next weeks. They showed us where we could get the best Caldo de Cana (sugarcane juice) and afterwards… hotel and chill. Legs up and getting ready for day 2!