The day after our cycle adventure from Lake Manyara to Lake Natron, we planned to have a relaxing day and explore the area around Lake Natron.

When you visit this conservation area, you will get a Maasai guide assigned for the duration of your stay. Our guide was Gideon. We met in the village and he took us on a hike to the waterfalls and showed us the lake.

While walking around he talked about climbing Ol Doinyo Lengai. He metioned that it is fairly easy and the view from up there is beautiful. During dinner the night before at the Maasai Giraffe campsite, we talked to a group of mountaineers from Austria who would go up the mountain that night.

Of course the idea of climbing Ol Doinyo Lengai started to play in my head immediately. We had so much fun on the Kili and it was so easy. Why not go for another summit.

After our 20km hike, we went back to Maasai Giraffe and I decided to go up the mountain that night. It was already five in the evening and we would leave around 22:30. We had a quick dinner and tried to sleep a bit, but it was so hot, it was impossible for me.

We left with the whole group in an open pick-up truck, and I was still thinking that it would be an easy hike. Boy oh Boy, was I wrong…

Our way to the start of the track

We were al standing in the back of the open pick-up truck and made our way through the Maasai land. No way you could make it with a normal car. Again lots of sand, rocks, ups and downs. And the driver must have loved the ride as he was driving like a maniac.

We had full-moon and the whole ride you would see the magical volcano in front of us. It really reminded me of my favorite volcano in New Zealand. Mount Taranaki, the volcano in the backyard of my parents and brother & family. I felt sad that moment realizing again that we actually would have been with them at that very moment. And not knowing when we can see eachother again. But of course at the same time happy that we were at such a beautiful place we otherwise would not have seen.

All of a sudden the road stopped and turned into a single-track. We all hopped out of the car, grabbed our backpacks & started our hike. 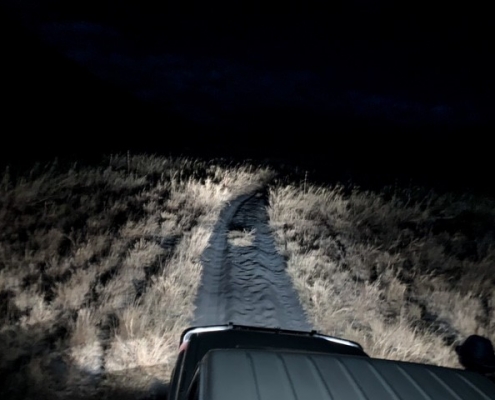 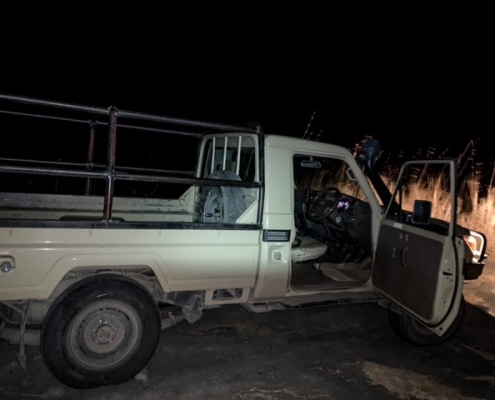 The only way is up

It was so windy! But still hot. I was wearing shorts and a t-shirt, but realized I would have to put some more layers soon before I got cold. Wise lessons learned on the Kilimanjaro.

We all started walking in one long line, wearing headlamps. Kind of a weird vibe to start walking around midnight, already quite tired and in the dark. We did not talk much, but at some point two people in front of me stopped and said: snake!

Of course the first thing you do is take your phone and make a video. I HAD to show this to Franklin, because he is so afraid of snakes. At that point I knew for sure it was the right decision for him to stay in the tent.

I don’t know what I exactly expected, but I thought one of the guides would maybe put the snake away. Stupid thought, because it would be dangerous and now the snake was quite peaceful. But now we had to pass the snake, who was facing us with his little tongue constantly coming out of his mouth. The path was super narrow, maybe less than one meter. So I closed my eyes and jumped passed the snake very quickly.

A few steps later a scorpion crossed right in front of my feet. I thought it was a massive spider, so at first I was happy it was not. But then I got super uncomfortable. I was still wearing shorts and my running shoes. I had the feeling a snake would be behind every rock, and scropions would attack us. So when we stopped to take a break I did not want to sit down on the rocks and was afraid to pee. But I did quickly put on my long pants.

At this point the path also got steeper. If you looked left and right you would just see that the mountain was going straight down. What if I would make a misstep and fall hundreds of meters down? Why the hell did my guide tell me this would be an easy hike. I was so super scared. Going up was still ok, but how can you make it down a mountain when it`s so damn steep?

When we almost reached the summit we had to take another break because we were too fast. If we would go up immediately, we would reach way before sunrise and it would be too cold with the hard wind.

At that point I put aside my stubborn pride and asked the group of Austrians if I was the only one who was scared to death. It turned out that none of them found it scary, but they were super experienced mountaineers and a couple of them even mountain rescuers! One of them even climbed the Everest before. I was so relieved, and the rest of the climb they supported me and reassuered me all would be ok.

It was just a couple more minutes to the top. I had no idea what kind of view to expect…

The summit of Ol Doinyo Lengai

Reaching the summit made it worth every step of that horrible climb. We were walking on the ridge and the mountain was going steep down on both sides. The left side into the crater and the right side down the mountain.

The crater is massive. And you can almost walk a full loop on the rim around it. The volcano is active and our guide told us that from week to week you can have a completely different view. Sometimes it is all empty, and this time a lava cone was building, which was already a couple of meters high.

On a clear morning you can see Mount Kilimanjaro, Mount Meru, the Serengeti and Ngorongoro from the summit. For us it was quite cloudy so no Kili for us, but the view… incredible! I could have stayed there for hours (Maybe also because I was still slightly scared of the way down).

But breakfast and Franklin were waiting… so we started the descent. 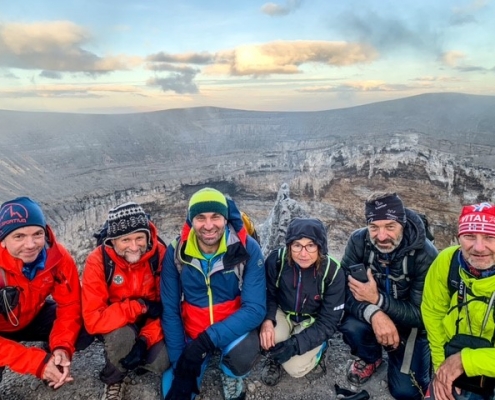 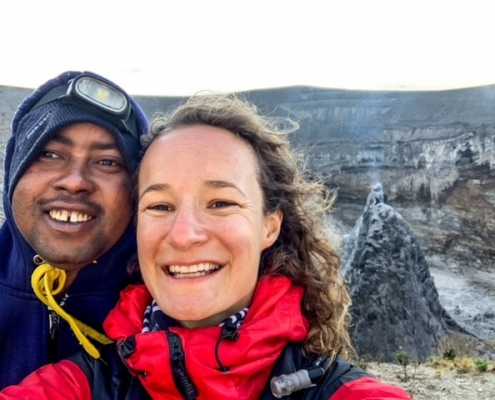 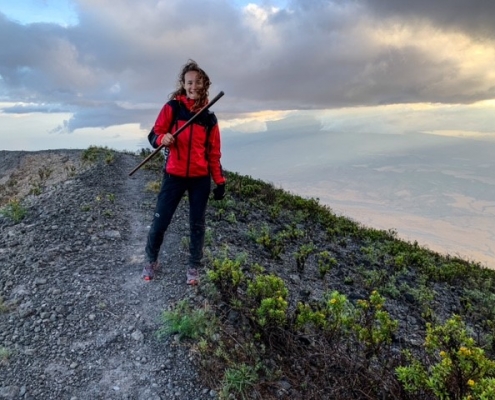 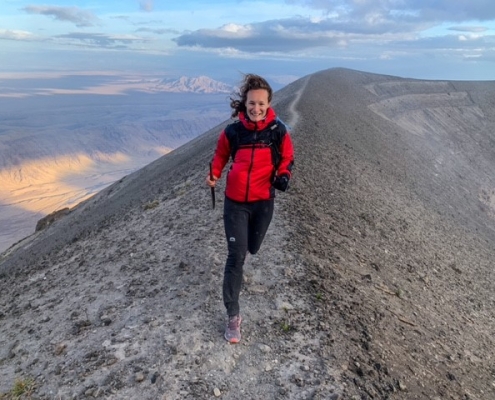 The only way is down

And then the descent was so much easier than expected. I had one mountain rescuer in front of me, one right behine me & all I had to do is follow their steps. After about ten minutes I was super comfortable and let go of the fear. With daylight you could see that the volcano is indeed super steep, but there is sort of a path that guides you up and down. In the darkness it just looked like one giant steep wall we had to slide down.

With the sun out it also go extremely hot, which also explains why you would climb the mountain at night. I think during the day you would melt.

We made it back to the car without falling and without seeing any snakes.

Back at Maasai Giraffe we had a massive breakfast and luckily we could drive back to Lake Manyara with our Austrian friends. Because cycling after climbing that monster was not on top of my list of things to do.

Franklin tied the bikes to the roof of the van and we protected them as good as possible with blankets. But driving back on the rocky gravel road made it sound like our bikes would be split in half. It was a more painful 3.5 hour experience than climbing Ol Doinyo Lengai. But to our surprise when we arrived, the bikes were perfectly ok.

We said goodbye to the Austrians and we are sure that we will meet again when we are back in Europe! What a fantastic group! 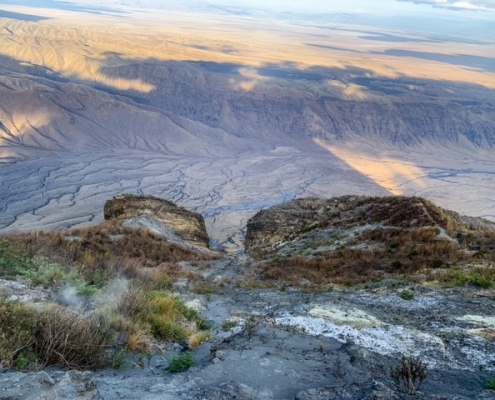 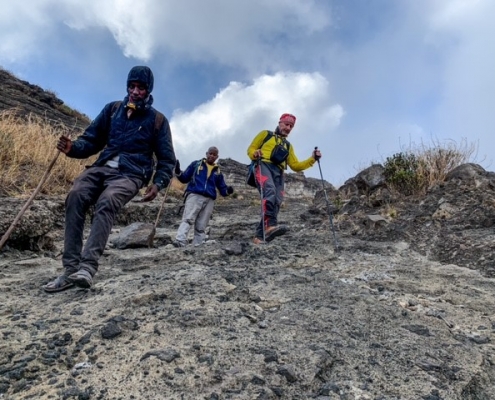 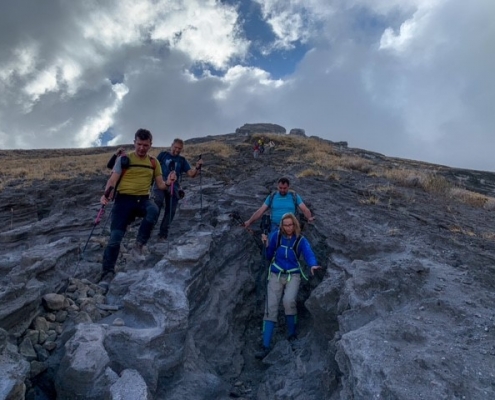 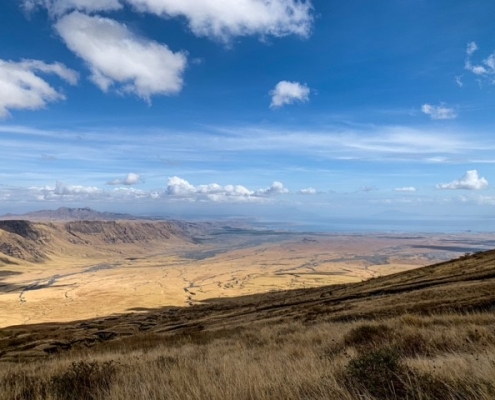 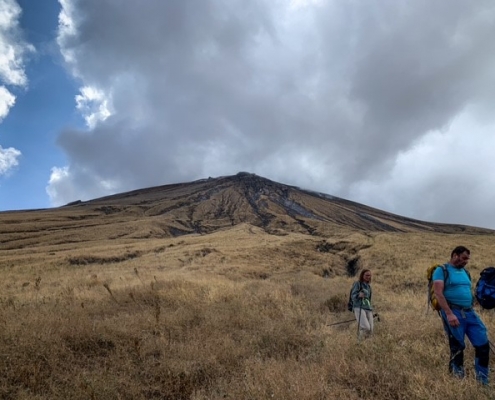 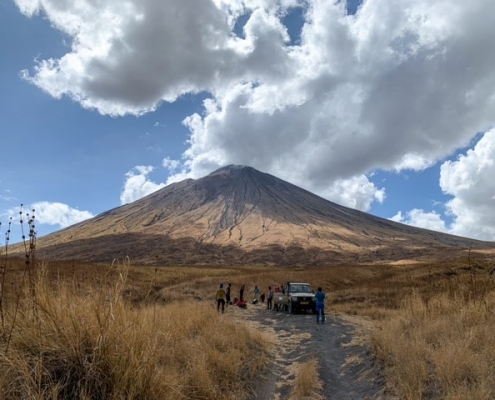 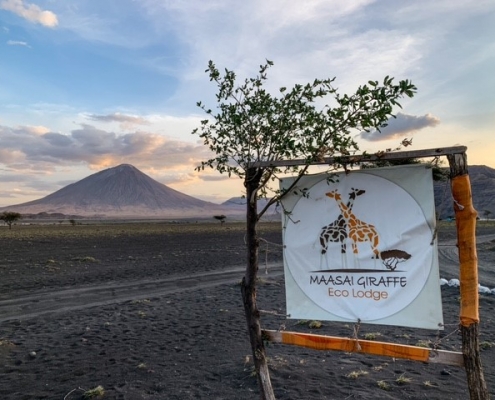 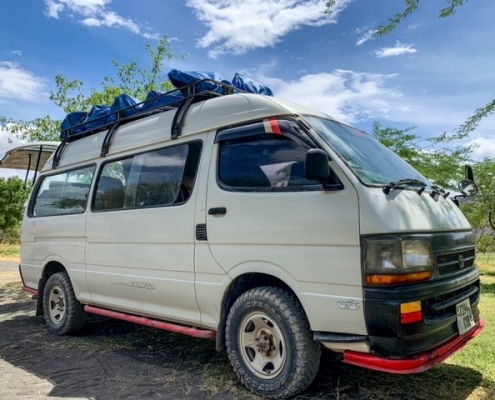 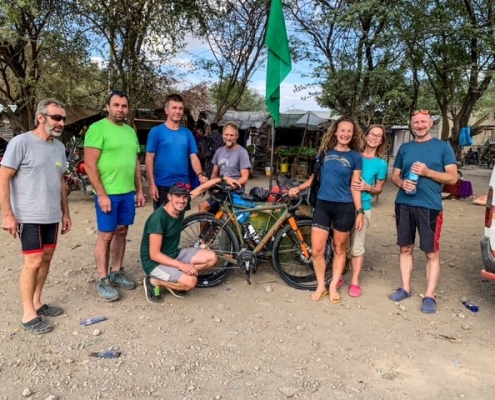