When we arrived at Kilimanjaro airport, we were super happy to see that the bikes arrived safely and were still in one piece. After trying three different cars, from which the drivers were 100% sure the bikes would fit, we found a van in which we could transport both bikes to the hotel. Of course after some additional negotiation of the price, because “this car had a way bigger engine than negotiated in the first place..”

Driving from the airport to Moshi, we both felt that we might be a bit out of place with our brand-new bikes, clothing and travel bags. But hopefully when all is dusty we will blend in a bit more.

Our hotel happened to be only 500 meters from Mountain Bike House Moshi, where Barakka works, who is the best cyclist of this region in Tanzania. He just recently won the K to N Mountain bike race, which is a multi-stage race from Mount Kilimanjaro all the way to Lake Natron. After a tour around the hostel, we decided that the next morning we would go on a three-day cycle trip around the mountain. A good warm-up for climbing Mount Kili on Sunday. 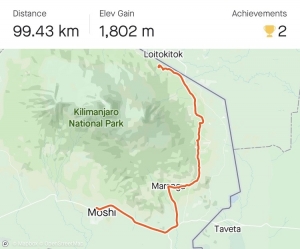 The first day to test our gravel bikes with the bike bags. We had planned to leave around 09:00AM but packing, attaching the bags, fitting the water bottles etc. took a bit more time than expected. As usual. We left around 10:00AM, ready to cycle 100km to Snow Cap Campsite.

The first 30km is next to the main road, with some slight ups and downs. There is quite some space at the left side of the road to cycle and wave at all the people we were passing.

From Himo we took a smaller road up to Marangu where we wanted to do a short hike to the waterfalls. But when we passed a secondary school we heard the kids singing and Barakka asked for us if we could get a tour, which was a great experience.

The road up to Marangu was going up and it was really quite hard. It was so hot! We were moving slower than expected and skipped the waterfalls to make sure we would make it to the campsite before sunset. After a quick lunch (Chips Mayai – love it!) we cycled to Mwika, back to the main road. From here it was another 51km and around 900m climbing.

All with some extra energy from lunch, we were flying! Getting closer to Tarakea we had a beautiful view of Mount Kilimanjaro and we could clearly see the smoke of the fire. Before the last left turn to the campsite, we had some fried cassava next to the road & then realized we had to hike up the last 1km of gravel road.

But the campsite… AMAZING! We had a super warm welcome and a fresh dinner was prepared. The three of us had the whole place for ourselves, and we could get a room for the same price as camping. Ready for a good night of sleep!

Below a video summary of day 1! Sorry for the beginner mistake filming the wrong way. Next time we will do different. Promise!

When we walked over to breakfast, we could see how beautiful Snow Cap is. You have a clear view of the peak of Kilimanjaro and an endless garden with trees and flowers. I can imagine that this place can be quite busy when they have the normal amount of tourists around.

Breakfast was prepared at 08:00AM and after some re-packing and distributing the weight more equally, we were ready for day 2! This day we planned to cycle around 80km, almost on the border between Kenya and Tanzania. We had an incredible clear view of the mountain and we started with some fast downhills. It looked to be an easier day than the first one!

I was just thinking that you could easily do this ride with a normal road bike & I told the guys that next time we should do the whole loop in one day. And then the road changed to harsh gravel. Rocks, sand and some sharp curves. The guys were flying in the front and we stopped where some friendly Maasai were standing. When getting back on the bike, I realized that my front tire was flat. Good we at least thought to bring some spare tubes and we were back on the road after a couple of minutes.

At this point we thought that the gravel road would be around 10km max. And the gravel was not like in Switzerland, nice and smooth, but it took quite some effort to navigate through the bigger rocks and climb all the steep short hills. And no real recovery going down, because it was for us, road bikers, quite technical. There were almost no cars on this road, and we passed small villages, Maasai with their animals and stopped for a sugar refill in a small shop.

At some point Barakka said that we should be quiet and pointed at some Baboons in the forest. Short after we saw groups of monkeys crossing the street in front of us. When you are on this road during the right time, you can also see zebra’s, elephants and other wildlife cross. All we saw this time was elephant poop and lots of cows, but still the views were so cool. Large parts of the ride you could look out over the valley in Kenya.

The last 10km of gravel seemed to be never ending, after every hill you could see another endless road of red gravel. But all of a sudden super smooth black tarmac appeared and we were flying downhill.

The last 2km up to Simba Farm were uphill and.. gravel and rocks. Must admit that this was not the easiest ride of our lives. Also not having had any food since breakfast, thinking it would be a very easy ride mainly downhill. And then we arrived at the farm. Again, a super warm welcome and seriously breathtaking views from the terrace. Also, here it was super quiet, so we were offered a room instead of having to put up the tent. After all we could have left all the camping gear in Moshi… but it was a good test ride with heavier bags. The dinner here was cooked with vegetables from the farm and it was incredible. After dinner we sat around the fire for a while & then headed to our lodge. 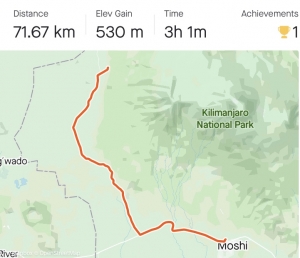 It rained so hard during the night! Which was really good for the fire on the mountain. Our bikes were outside during the night and Franklin left his Ortlieb bag with his sleeping bag hanging at the back of the bike. We checked the damage…but everything was dry! So waterproof bags, also tested!

Breakfast was again made with homegrown and homemade products. Yoghurt, fruits, granola, omelet, pancakes and coffee! When the sky cleared a little bit, we could see the contours of mount Meru and the valley around it. When you have clear weather and stay at this place, we can guarantee one of the best sunsets of your life and the best possible view you can imagine during breakfast.

We expected to cycle in the rain all day, but by the time the bikes were packed it was dry and hot again. The views of the valleys during the downhills are nothing you can even compare to cycling in Switzerland. The country is so open, wide, and then in the middle rise the volcanoes.

Strangely I was getting hungry again after only one hour on the bike. So, we stopped for more Chips Mayai and bananas in Sanya Juju. In Bomba La Ngombe we took a left turn back onto the main road T2 towards Moshi. We could clearly see that this was home turf for Barakka, as he was taking the lead and sprinting home. Afterwards he told us that his boss even got a phone call from a friend saying that we were racing down the highway.

In the hotel they helped us to wash all the sand and dust from the bikes and we had again a fantastic dinner, made with fresh vegetables at The Moutainbikes House in Moshi. Ready for a day of relaxing and preparing for our climb of Mount Kilimanjaro, which we start on Sunday the 18th.

Follow us!
This error message is only visible to WordPress admins

There has been a problem with your Instagram Feed.