After spending three days in Lamadai and Bunda, the area where the Serengeti Marathon takes place, we felt that it was really time again for a short cycling adventure. Franklin is a big fan of NomadMania and through this website he found out that the nearby island “Ukerewe” must be a hidden gem. Only 90km cycling! We were not sure if it would be gravel, mud, sand or tarmac, but it sounded like a fun ride!

The plan was to leave on Wednesday morning at 06:30. We ended up leaving at 09:00. One of the bikes had a puncture, which we did not notice the day before and breakfast and coffee was not yet ready at 06:00.

Once on the way we realized that that the heavy rain from the days before had a massive impact on the road condition. It was slippery, wet and cars and busses were still passing full speed. And then after km 10… puncture #2 of the day. Four little boys passed by with a pump to support us fixing the bike, very sweet.

We discussed if it was a good idea to keep going. The road was bad, it was cloudy, and we had a marathon to run on Saturday. But then the sun started shining and we agreed to at least cycle a bit further. And then after about 35km… tarmac! Super smooth cycling with a nice view of Lake Victoria. Also on this route, the people were super friendly and greeting us all the time.

In Kisorya we had to take the ferry to the island. We had to wait for about 1.5 hours, had some Chipsi Mayai, some rice with beans (which Franklin shared with a super cute little girl) and walked around town for a bit. The ferry left at 15:00 and only took about 30 minutes.

Once arrived at Ukurewe we saw that it was so much greener on the island than on the mainland. Super beautiful! We cycled another 10km on the gravel to Nansio, the main city of the island. We did not book a hotel and checked a couple of local lodges. Most of them had a very loud bar next to the rooms, but lodge 4 was great and we decided to stay there for two nights. The original plan was to cycle back the next day, but this would leave us no time to explore the island, so we changed plans and explored the island on Thursday.

Ukerwere is the largest lake island of Africa, with an area of 530 km2. So there is lots to explore and we believe it is best done by bicycle, motorbike or tuk-tuk as there are many small roads to be discovered.

We had breakfast in Nansio and wanted to check out a hotel located more centrally on the island. Only a 12 km bike ride, so shorts, t-shirt, Havaianas and good to go! When cycling around the island you see how many children and schools Ukerewe has. It seemed like children were coming from every corner and street in groups. All of them greet us, wave, or run with us for a while. The ones that are surprised to see a Mzungu (someone from non-African descent) greet and start laughing really hard once we passed. Must be a weird image, two tourists alone by bike around the island.

During the three days on the island, we did not see any other tourists from other countries. We only met a couple of people who were visiting from other Tanzanian cities.

We never managed to find the hotel. We did see many farms, beautiful gravel roads, a huge market by the lake, forest, endless amounts of mangoes and pineapples and many bright smiles.

We ended up riding for 60km, with quite some meters of climbing as well. The legs were already heavy from the day before, and this turned out to be more than a recovery ride. Let’s see not the best preparation for the marathon we would have in two days.

After the ride we washed our bikes at the “carwash” and had a Tamarin juice at the local juice bar. Owned by a lovely woman, who invited us for dinner of lunch when we would come back from the Marathon.

We planned to go to bed early and take the bus back to Bunda the next morning. Cycling back for 4+ hours and running the marathon on Saturday was really a bad idea. The owner of the guest house we stayed, said we could leave our bikes in his room & pick them up again on Sunday. Around 18:30 we ordered dinner, which was ready a little bit after 20:30. To be honest, this is quite normal in Tanzania. All the dishes are made from fresh produce and sometimes the chef even has to go to the market quickly to buy what you ordered. But it was worth the wait, the food was delicious!

The first night we arrived at the hotel, there were about 7 people in the lobby with albinism. We talked for a bit and it turned out that on Ukerewe the percentage of people with albinism is higher than in the rest of Tanzania. But still not everyone understands this is caused by genetics and nothing else.

The guys and women we met at the hotel come to the island once a year to visit schools and villages to explain about albinism to finally get rid of the misconceptions. And to connect with each other and share experiences. They do this by singing about their lives, and performing theater. In this way they have an engaging interaction with the children and people. With this as positive starting point they inform and educate.

When we started reading more about it, we found the following. Which to us is extremely shocking:

“Tanzania has the highest prevalence of albinism in the world. People with albinism in Africa face a range of prejudices and social stigmas. They are often dismissed as belonging to another race, or as ghosts or spirits.”

We were shocked to read that people with albinism actually get attacked.

“Tanzania has the largest recorded number of attacks. These attacks range from maiming, to death, to desecrating a grave. There is a black market for body parts, hair and skin used by witchdoctors in potions and charms.” This article is from 2006, and we are not sure if the attacks are still taking place, but this is only 14 years ago.

“There is a higher proportion of people with albinism on Ukerewe – around 75 on the island. It is a remote island, reached by a 1,5h – 3h ferry over the lake. Historically children with albinism have been brought and abandoned on the island, while others have sought safety in this remote haven.”

It was a humbling experience to meet these lovely people and we have to say… they were by far the most fashionable people we have met in Tanzania so far! 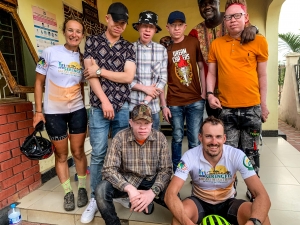 We had a very nice day cycling around the island and experiencing local life. We did not really fulfil our tourist duties on Ukerewe as we did not visit any of the local sights. But for sure there are things to do!

Rutare Hill: You can climb or cycle up to this highest point of the island, which gives a view of the whole island. The island has an endless amount of small bays, is surrounded by beautiful rocks, forest and farm land.

Dancing Stone: On the small Ukara Island, you find the dancing rock. A ferry departs daily from Ukerewe. You can try yourself to lift it and move it, which will be impossible. But the family who looks over the rock, somehow can make it move.

Hotel: We stayed at La Bima hotel in the center of Nansio. The rooms were clean and good for a very reasonable price. We liked this hotel as it was one of the few without a bar with loud music. Dinner we had at Nansio Lodge we had dinner. It takes a while for the food to be prepared (1-2 hours) but it is fresh and delicious. For sure worth the wait.

Juice bar: Opposite the bus stop in Nansio, there is the lovely “Juicy Fruty Bar”. The lady who owns the juice bar is a sweetheart and the juices are delicious. Our go to place after the bike ride, in the morning, and actually any time of the day.

We did not have a guide, but we read online that many people loved the tours they have done with Pascal, for a very reasonable price.

How to reach the island?

You can only reach the island by boat. Either from Mwanza (the second largest city of Tanzania) or from the Bunda side. We just cycled without a plan and took the first possible ferry to the island. Below the boat times and prices from the time we went there (November – 2020). Before you depart it is best to just go to the harbour and ask the current information. The latest schedule for the ferry from and to Mwanza, you can find here.